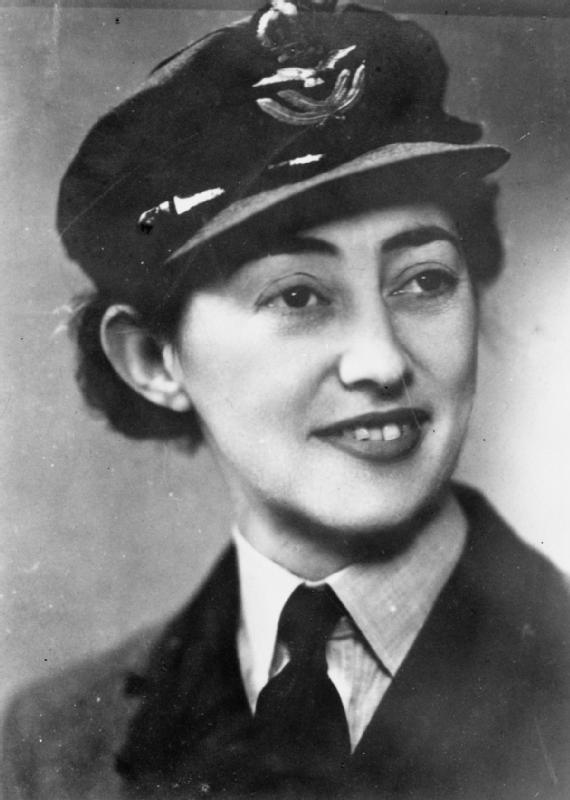 As Christmas of 1940 neared, Yvonne and her husband of two years, Charles, were at home preparing for the birth of their second child when their London flat was destroyed by Luftwaffe bombs. Charles, still recuperating from combat wounds from just a month earlier, was killed. Yvonne’s life was saved by an iron bathtub but her unborn child did not live. Yvonne vowed revenge and to “take her husband’s place in the Armed Forces”. Less than three years later, on the night of August 22nd 1943, the best “fist” in the business: “Agent Annette” was parachuted into occupied France as a wireless operator for George Starr’s Wheelwright Circuit and there she extracted her “pound of flesh” sending and receiving over one thousand clandestine messages.

Yvonne Cormeau,
(1909–1997)
Beatrice Yvonne Biesterfeld was born on December 18th 1909 in Shanghai, China to a Belgian consular official and a Scottish mother; she went to schools in both Belgium and Scotland. Yvonne was living in London in 1937 when she married an accountant named Charles Edouard Emile Cormeau. Their daughter Yvette was soon to follow. Her husband enlisted in The Rifle Brigade and in November of 1940 was wounded in France and returned home to the UK to recover; three weeks later he was killed when their London home was bombed. Yvonne was saved by a bathtub which fell over her head and protected her. Newly widowed, Yvonne volunteered to “do something and save France from the Nazis” when she joined the Women’s Auxiliary Air Force (WAAF) to become the secretary to the station commander at RAF Innsworth and was placed with the RAF Swinderby. After this, she answered a notice for linguists and was recruited into Britain’s ‘secret army’, its espionage and sabotage organization, the Special Operations Executive(SOE), where she trained as an F (France) Section wireless operator. Yvonne trained with Yolande Beekman, Cecily Lefort and Noor Inayat Khan; she would be the only one of the four female spies to survive the war. Her daughter, Yvette, was only two years old and was placed in an Ursuline convent in Oxfordshire where she stayed until war’s end.
Given a powder compact before leaving for France and the codename ‘Annette’ by the legendary spymaster and chief of SOE’s F section Colonel Maurice Buckmaster, she was dropped into France on the night of August 22nd 1943 near St. Antoine du Queyret, north-east of Bordeaux. Warned by Buckmaster what she could expect if detected, she refused to take along the cyanide pill so, if captured, she could commit suicide; she did arrive armed with a .22 revolver though.
Carrying out her clandestine operations in occupied France, she used the code names “Annette”, “Fairy” and “Safari” and sent over 400 transmissions back to London and received over 600, which was a record for the F Section. She arranged for arms and supplies to be dropped for the local Maquis and participated in sabotage by cutting power and telephone lines, resulting in the cutting off of Wehrmacht Group G near Toulouse. “Annette” was almost arrested by the Nazis after being betrayed but but continued to operate despite “wanted” posters which gave an accurate sketch and description. Her success was possibly owed to the fact that she operated “off the grid” using car batteries for transmitter power and not bathing in running water, making it difficult for the Gestapo direction finding vans to locate her. They suspected the areas which she may be operating but they ruled out the village because it had no electricity or running water. They did not believe an English woman would choose such a place to hide, with no chance for a bath. She was once stopped at a German roadblock with Starr; the pair was questioned under gunpoint, but fooled the Germans, who bought her story and ID that she was a district nurse, and she passed off her radio equipment as an X-ray machine. She worked heroically for thirteen months and evaded arrest despite some narrow escapes. Yvonne was shot in the leg by a German patrol, but managed to escape; the dress she wore on and her bloodstained briefcase are on permanent display in the Imperial War Museum in London along with her WAAF officer’s uniform.
After the end of the war, she was reunited with her daughter Yvette and they lived in London; she left the WAAF with the rank of Flight Officer then worked as a translator in the SOE section of the Foreign Office. Yvonne Cormeau was appointed MBE(Member of the British Empire), and decorated with the Légion d’honneur, Croix de Guerre, Médaille de la Résistance, and Palmes Academiques. She became a instrumental part of the F Section Veterans Association and their annual Bastille Day dinner. She married for the second time in 1988 to James Farrow, whom she had met in 1945; they lived in Derbyshire until he died in 1992.
In 1989, the host of This Is Your Life accomplished something that the Gestapo was not able to, make “Annette” cry. She was eighty years old, and proclaimed to Michael Aspel “I won’t cry, you know. We were trained not to” . The daughters of the French Resistance hero, Marius Bouchou who had hidden Yvonne, brought to the show, her parachute from the night that “Annette” dropped behind enemy lines. Their father had perished in a concentration camp, but Simone and Paulette Bouchou were there to greet Yvonne; “Annette” broke down into tears.
Beatrice Yvonne Biesterfeld Cormeau Farrow spent her final years at the Tall Pines Nursing Home, Fleet, Hampshire, where she passed peacefully on Christmas Day 1997.
(Oral History)
https://www.iwm.org.uk/collections/item/object/80007171