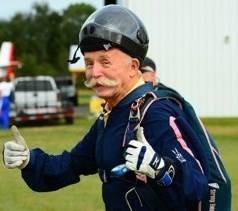 Six years ago while attending the Skydiving Museum & Hall of Fame’s yearly celebration at Skydive Chicago I became lost in a small town nearby; while driving in circles, I saw a mustache out of the corner of my eye and thought “No way!”, I drove around the town center again and sure enough, there was Bill Morrissey, sweating in the sun. I pulled up and with my best smart ass smile, I said “You look thirsty, want a tea?” and offered him a large, unopened, cold can of Arizona tea. He was eternally grateful, and I was thrilled shitless. 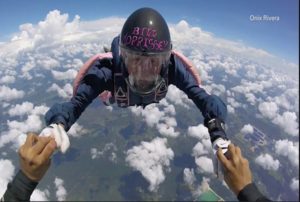 Bill Morrissey D-516, one of the “fathers” of tandem skydiving, director of the tandem training program for Strong Enterprises, training over 750 military and civilian instructors all over the world, will be inducted into the Skydiving Hall of Fame on October 8th in Eloy. Bill Morrissey started jumping as a paratrooper with the 82nd Airborne Division, made his first free-fall in 1959 and then shortly after leaving the Army started sport jumping, competing in style and accuracy in 1964 and 1966 and working as a US Nationals training judge. “I’ve never won any world championships, never won any big medals,” Bill said. “Though I tried for the U.S. team and didn’t make it.”
In 1982, he wanted to find a way where students could skydive attached to their instructors; he shared his vision with his friend Ted Strong, who owned a parachute equipment company. Ted Strong: “[With] dual controls, you can teach how to do things in freefall, have them pull the ripcord, have them steer. I was thinking of that and Bill Morrissey came down from New York. We went out for a beer and on a napkin he [showed me] ‘this idea… two people…’ And I said, ‘You know Bill, I’ve been thinking the same thing!'” Strong made a parachute large enough to support the weight of two people and he and Morrissey took two test jumps, one with Morrissey in the back and another with him in the front. The jumps were hairy to say the least and the landings were nightmarish, but his jumps were successful. Tandem skydiving was born! Strong put Morrissey in charge of creating the technique; “I became the tandem instructor, the instructor examiner to teach tandem instructors, and I became the program director, all in the space of two hours and only having made two jumps,” he said. Strong Enterprises designed a dual-passenger system that is still in use today, and Bill Morrissey has trained hundreds of instructors over the years and possibly saved hundreds of lives. The students no longer had to make their first jump alone. He and Ted Strong changed the face of skydiving. 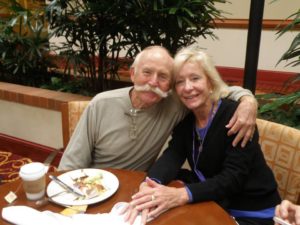 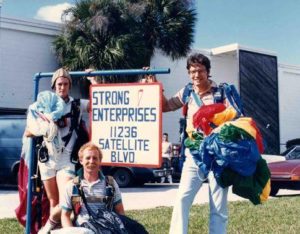 In 2004 Bill Morrissey received the Štefan Banič Gold Medal, joining such greats as Bill Booth (HOF 2010), Col. Joe Kittinger Jr.(HOF 2010), Jerry Bird (HOF 2010), Dan Poynter(HOF 2012), and President George H.W. Bush. One of Bill Morrissey’s best-known accomplishments was the study of the “Tandem Side-Spin Phenomenon.” Bill has continued to work with all the tandem manufacturers in further developing equipment and training techniques. Though Morrissey doesn’t teach as much as he used to, he still gives lectures around the country, and tips to skydivers. He still jumps out of airplanes; that won’t stop anytime soon.
“When I’m in the airplane, I look outside and I look down and I look around and I know that’s where I belong,”-Bill Morrissey
Bill Morrissey was inducted, along with five others at Skydive Arizona into the Skydiving Hall of Fame during its weekend celebration on October 6-9, 2016. 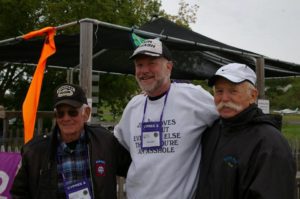