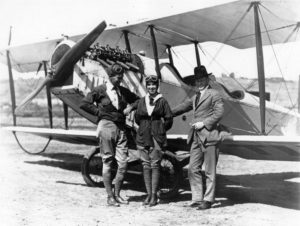 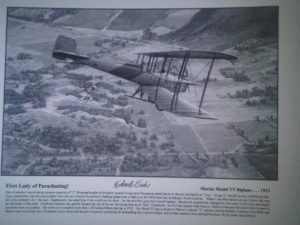 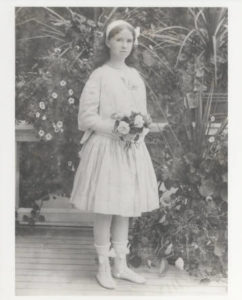 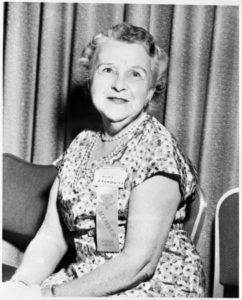 At the age of 15, Georgia Ann “Tiny” Thompson convinced a neighbor to take her to see “The Broadwicks and Their Famous French Aeronauts,” who dropped from a hot air balloon and descended using a parachute. Tiny persuaded Broadwick to let her join his crew of aerial performers. Considered ” The First Lady of Parachuting”, Tiny is the first woman to jump from an airplane and the first person to intentionally delay her opening by using a ripcord.

Tiny was born Georgia Ann Thompson on a farm in Granville County North Carolina to George and Emma Ross Thompson on April 8, 1893. The last of seven daughters, weighing only 3 pounds, she was given the nickname “Tiny” due to her small size; Tiny reached only 4′ 1″ and weighed in at 80 pounds as an adult. Tiny’s early life was one of hardship; her parents raised pigs and chickens and Tiny worked the tobacco fields. At the age of six, due to a drop in farm prices, the Thompsons were forced to give up their farm, taking work at the Harriet Cotton Mill in nearby Henderson. Tiny married William Aulsie Jacobs when she was only twelve and a short time later was pregnant with her only child, Verla. Her husband soon abandoned her and Verla, forcing Tiny take a job working 12 to 14 hour shifts at the mill, earning forty cents per day. She would walk home twice a day to nurse her child and return to complete her shift 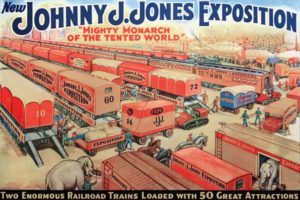 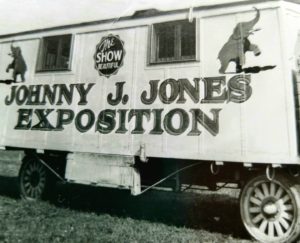 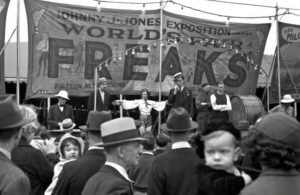 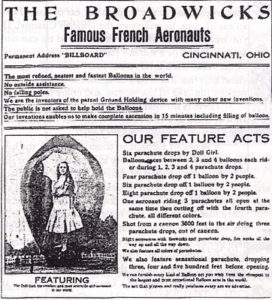 Tiny’s life of boredom and drudgery would soon come to an end though. In the spring of 1908, Tiny convinced a neighbor to take her to Raleigh to the Johnny J. Jones Exposition Shows to see “The Broadwicks and Their Famous French Aeronauts,” which featured a stunt performer named Charles Broadwick (aka: John Murray) who dropped from a hot air balloon and descended using a parachute.  Tiny convinced Broadwick that she could do a better job than him. “When I seen this balloon go up, I knew that’s all I wanted to do! I hung around until they came back to the lot where the balloon had left from and told them I wanted to join them. I was hell-bound and determined to get in that act!” Talking up her small frame and assuring him that she could manage a light and easy descent to the ground without trouble. Tiny persuaded Broadwick to let her join his crew of aerial performers. 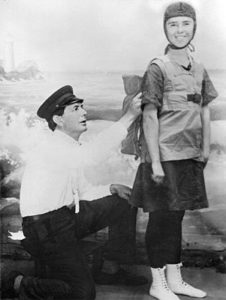 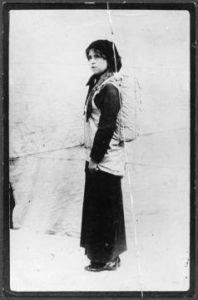 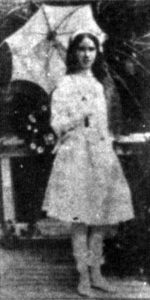 Charles Broadwick needed some convincing but knew a good thing when he saw it. Promising to send money back for Tiny’s daughter Verla, he was able to get her parent’s permission; her mother eventually agreeing to give the arrangement a trial. Charles Broadwick “adopted” the 15 year old girl since it was not considered proper for a young woman to travel with an unrelated older man. Miss Tiny Broadwick, the World’s Most Daring Aviatrice-Parachutistl” was born. The teenage parachutist and Charles Broadwick traveled all over the country with the Johnny J. Jones Carnival Co. Billed as the the Doll Girl because of her small size, she performed in ruffled bloomers, a silk dress with pink bows  in her hair; an outfit the rough and tumble Tiny hated. Tiny made her first parachute jump before the act left Raleigh; landing right in the middle of a big blackberry bush! Described this way, “I tell you, honey, it was the most wonderful sensation in the world!”  “Tiny Broadwick” became an instant headliner. They traveled all over the United States with the popular balloon act, during which the fearless Tiny performed daring drops often under multiple parachutes, sometimes with flares or torches. She had several harrowing mishaps, including fires during her career; landing  on top  of a train, getting tangled in a windmill and high tension wires and many rough landings during which she broke several bones and dislocated her shoulder on several occasions, she never lost her enthusiasm for dropping. As far as payment and money for her daughter Tiny was quite often given a Coke and a candy bar, or sometimes pocket change. Charles Broadwick was not a good financial manager. 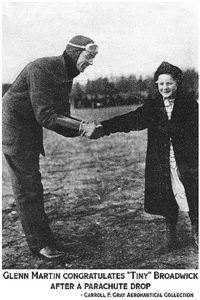 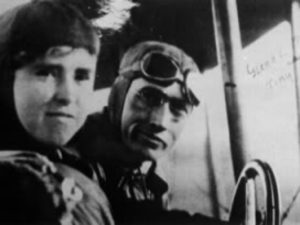 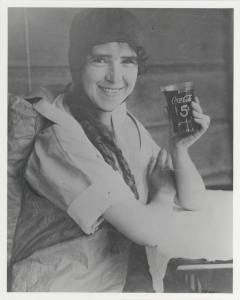 In 1912, on a field south of downtown Los Angeles, the third Dominguez Air Meet, the greatest aviation event in the United States was being held. The absolute cream of the flying world including designer Glenn Curtiss, famed stunt flyer and future manufacturer Glenn Martin, pilot Lincoln Beachey would be there; having moved west the year before, Charles Broadwick and Tiny would also be in attendance. She met Orville Wright who told her, “I’m glad you’re interested in aviation,” to which she replied, “I’m mostly interested in parachutes.” One day at the Los Angeles air meet, Tiny met airplane manufacturer Glenn L. Martin, who had picked her up in one of his airplanes after an off-field landing, Tiny’s first airplane ride, and it proved to be a turning point in her life. He proposed that she drop from one of his airplanes; “jumping” at the chance, she agreed without hesitation. On June 21, 1913, Tiny hung from a trapeze type swing suspended under the right side of Martin’s airplane just behind the wing. Her parachute, developed by Charles Broadwick, was on a shelf above her, and when the plane was at 2,000 feet over Los Angeles, Tiny released a lever that made the seat release from under her. The parachute, which was attached to the airplane by a thin(static) line, opened automatically, and she parachuted safely to earth, landing in Griffith Park making her the first woman to parachute from an airplane. 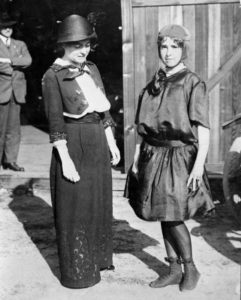 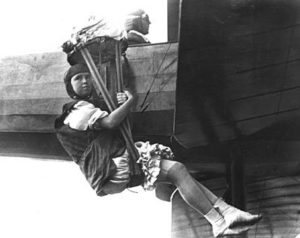 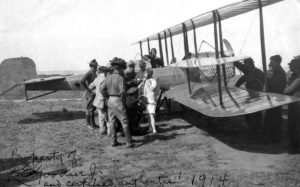 Two reporters were on hand and wrote stories about this eventful day. ” … Tiny Broadwick …crossed the great divide between the clouds and the earth,” wrote Grace Wilcox. “When she was ready to drop, Martin touched my shoulder,” Bonnie Glessner, wrote, “I faced about and turned my eyes on the face of the child. She was clambering over the side of the machine as though it were stationary. Once over, she clung tenaciously, her eyes fixed on Martin, who was just then looking down over the side of the aeroplane. The signal came while he watched below. Just the slight movement of his hand but the girl understood and her lips formed a ‘goodbye’ which I sensed rather than heard. Smiling at me, she stepped off into space, not even a tremor of the machine showing she was gone.” “… as I watched with thickly beating heart, this nervy little girl stepped calmly over the edge of the aeroplane a thousand feet in the air, and with a brave little smile, plunged earthward.” That same year, she became the first women jump from a hydroplane and also the first to parachute into water; she emerged from Lake Michigan soaking wet to present  a wreath to Governor Edward F. Dunn of Illinois. 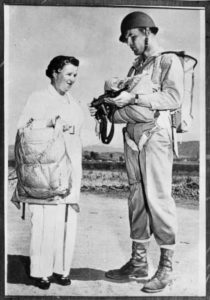 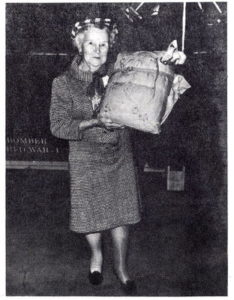 In 1914, she demonstrated a parachute to the US Army; her reputation as a parachutist and Broadwick’s “coatpack” led to the military into contacting her, Charles Broadwick and Glenn Martin about a formal demonstration. Many pilots in Europe were being killed  because they had no way to escape from a disabled airplane. Tiny was asked to demonstrate how to  parachute from a military airplane; she made four jumps at San Diego’s North Island. On her fourth drop, her parachute’s line became tangled in the airplane’s tail assembly and the slipstream prevented her from getting back in the airplane. Tiny cut the line to a short length and free fell toward the ground, then pulling the line by hand to open the parachute. This was the first planned free-fall descent, and the first deployment by use of a “rip cord”. She had proven that a pilot could return to the ground safely by bailing out of an airplane. As a result, she also became the first person to ever free-fall from an aircraft. The day after the Broadwick demonstration, the San Diego Union carried the following: “…Brigadier General George P. Scriven, chief signal officer, USA, has recommended the purchase of a number of parachutes ….” In those days, fires in airplanes were common that, in fear of a fiery end, some pilots carried pistols to commit suicide; others chose to jump to a quick death. If a pilot had Broadwick’s static-line parachute, however, he might have a chance at escaping a burning airplane.” She made  jumps at the 1915 and 1916 San Diego World’s Fairs. 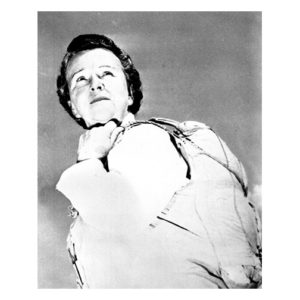 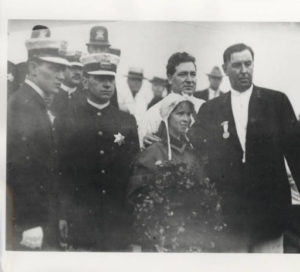 Tiny married Harry Brown in 1916 and stopped parachuting for four years; that marriage ended in divorce as did her 1912 marriage to Andrew Olsen. She also severed her relationship with Charles Broadwick during that period. She continued to go by the name of Georgia Brown until her death; she considered Broadwick to be her “stage’ name. She returned to jumping again in 1920 for two more years.  The novelty of parachuting had worn off, her ankles had begun to bother her but  she was very reluctant to give up parachuting because, she said, “I breathe so much better up there, and it’s so peaceful being that near to God.”. She retired permanently, making her last jump in San Diego in 1922, with over 1,100 jumps when she was just 29 years old. Tiny’s retirement from jumping did not come easily. She said: “It was terribly hard for me to settle down. I had so much pep and energy. I was lonesome for my work and occasionally made a few jumps.” She remained a powerful influence in the aviation field throughout her life. Tiny received many honors and awards in her lifetime. Among them are the U.S. Government Pioneer Aviation award and the John Glenn Medal.  She was the only woman in the 80 member Early Birds of Aviation. She also received the Gold Wings of the Adventurer’s Club in Los Angeles, and was made an honorary member of the 82nd Airborne Division at Ft. Bragg. With that honor, she was told she could jump any time she chose.  At the May 5, 1964 Tiny Broadwick Night dinner during which Tiny donated her parachute, National Air Museum Director Philip S. Hopkins said, “Measured in feet and inches, her nickname ‘Tiny’ is obviously appropriate. Measured by her courage and by her accomplishments, she stands tall among her many colleagues — the pioneers of flight.” On Nov 16, 1972, the Adventurers Club of Los Angeles held a “Tiny Broadwick Night”. Norm Heaton of USPA presented her with her Gold Wings for her 1000+ jumps. 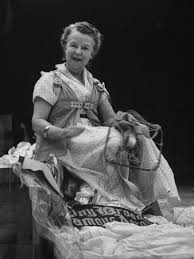 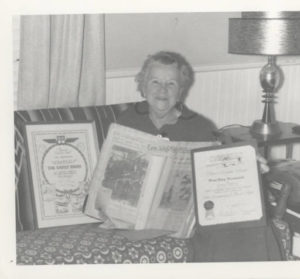 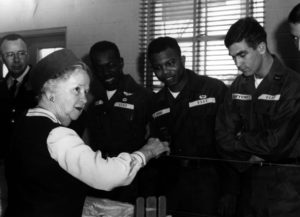 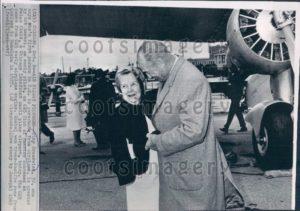 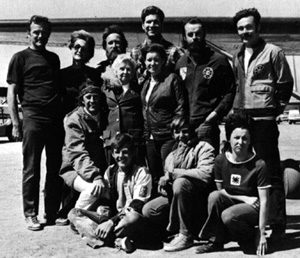 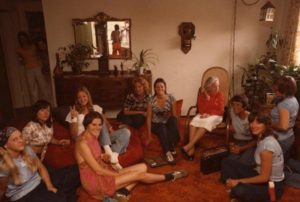